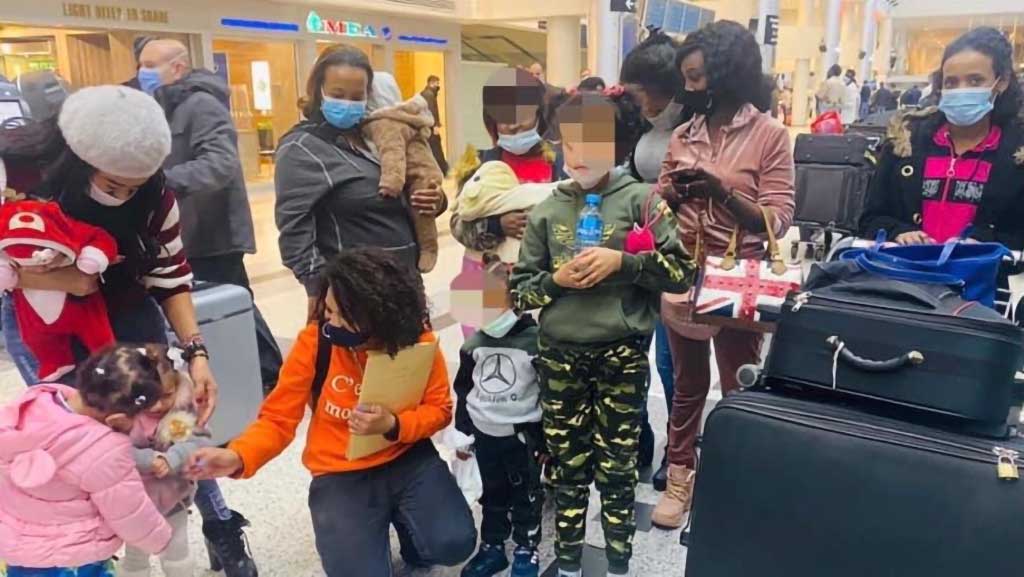 More migrant women and men traveled to their countries in the past week including Ethiopia, Bangladesh, Mali, Benin and Sudan with the support of ARM.

47 Ethiopian women and 12 children traveled to Ethiopia with the support of Egna Legna Besidet. One of the women and her child were detained at the airport for false accusation of theft submitted by her former employer.

Ethiopian Worker Stopped from Traveling for “Stealing her Own Passport” [here]

An Ethiopian domestic worker was reportedly not allowed to travel at Beirut’s airport after being stopped on the charge of stealing her own passport from her former employer when she fled their house. Egna Legna Besidet hired a lawyer for her case after the employer refused to drop the charge.

Egna Legna Besidet announced a new helpline to assist migrant domestic workers who wish to travel home but cannot due to legal obstacles. The numbers are 0096181688305 and 96181688305.

Report on Situation of Bangladeshi Workers Stuck in Lebanon [here]

An article by The Business Standard reported a protest staged by Bangladeshi workers outside their embassy in Beirut demanding to be evacuated, given the worsening of their living conditions and their inability to send remittances to their families.

An article by Reuters reported the ongoing obstacles facing migrant workers stranded in Lebanon, and the urgency to respond to their basic needs while waiting to be evacuated, including penalty fees imposed by the General Security and charges/complaints by employers.

Egna Legna Besidet released a video for International Migrants Day on the plight of migrant domestic workers under the Kafala system, especially during the ongoing crisis and after the Beirut port explosion.

Concern Worldwide released 2 videos on the impact of the explosion on migrant workers and refugees, their exclusion from relief response and aid  as well as from official and unofficial lists of victims and missing people.

In an Op-ed for International Migrants Day, the European Union’s ambassador to Lebanon called to end the Kafala system and endorsed the standard unified contract (SUC), drawing a contrast with the living and working conditions of Lebanese expats who are not subjected to the same treatment in the hosting countries.

Kafa Organization released a movie titled “Meheret” about an Ethiopian domestic worker in Lebanon and her struggle under the Kafala system.

The secretary of the Bangladeshi Ministry of Expatriates Welfare and Overseas Employment announced that the government was planning to start evacuating undocumented Bangldeshi workers stranded in Lebanon across several phases, in a press conference on the occasion of International Migrants Day.

The International Organization for Migration (IOM) organized a virtual concert to commemorate the International Migrants Day and address issues related to migration and challenges faced by Bangldeshi migrant workers abroad.

In an interview with The Daily Star, the Ethiopian consul in Lebanon Temesgen Oumer Furikam called for improving the conditions of migrant workers and admitted the Ethiopian government was unable to subsidize ticket prices for the evacuation of Ethiopian domestic workers.

The consul noted the difficulty to know the actual number of Ethiopian in Lebanon given that many of them have come after the 2013 ban imposed by the Ethiopian government on its citizen to travel to Lebanon, and hence everyone who came after that would be undocumented or trafficked.

In an interview with Business Echoes, the Ethiopian Consul stressed that Lebanese employers must pay the undue salaries to Ethiopian domestic workers, and added that the consulate has evacuated at least 2,500 people between September and November.

The consul also noted that 52% of the women who sought the support of the consulate for unpaid wages reported they had not been paid for 5 years.

A Bilateral Labor Migration Agreement (BLMA) between Ethiopia and Lebanon is currently underway to regulate migration of Ethiopian workers to Lebanon.

The Housing Monitor, a project by Public Works, released a report in collaboration with ARM on evictions and eviction threats against migrant workers that took place between April and June of this year.

ARM’s eviction helpline received a total of 145 calls during those 3 months from migrant workers of different nationalities, 95% of which did not have a legal document of the rent, which renders them vulnerable as tenants without access to good living conditions and at constant risk of being evicted.

Nine out of Ten Syrians in Extreme Poverty [here]

A report published on December 18 by UNHCR, WFP and UNICEF found that 9 out of 10 syrian refugees in Lebanon live below the extreme poverty line. Notably, the percentage of Syrians living in extreme poverty rose to 89% in 2020 compared to 55% in 2019, living on less than half the minimum wage.

A video by New TV covered the situation of migrant domestic workers in Lebanon in the context of the economic crisis and dollar shortage, highlighting the story of an Ethiopian domestic worker who worked for 3 years for a family without salary. The report emphasized how employers resort to accusing the worker of theft when she demands her unpaid wages.