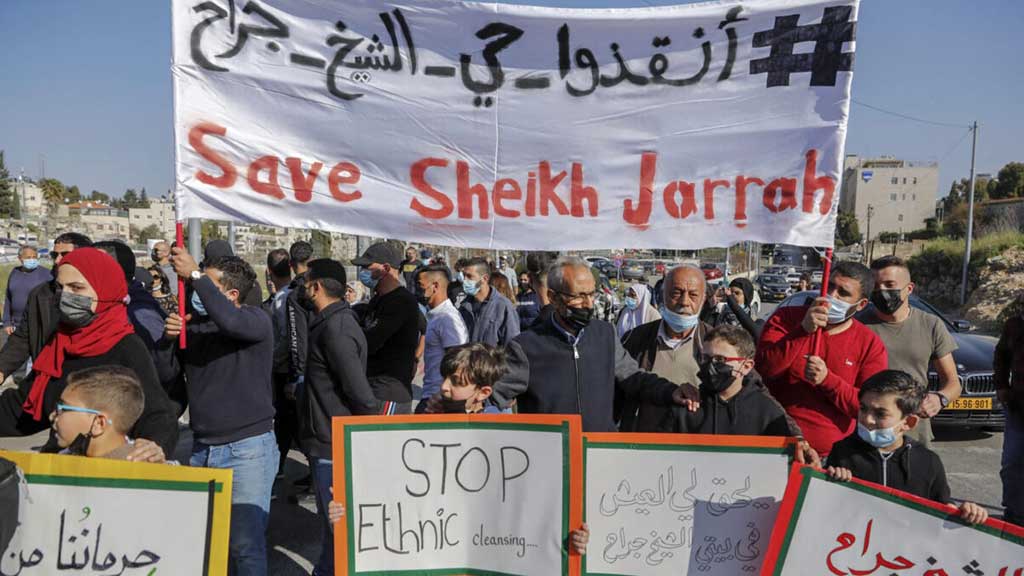 Protest against the ethnic cleansing by the Israeli occupation forces. Photo from Ahmad Gharabli/AFP/Getty Images

Important note 1: We are dedicating our social media platforms and these weekly news reports to share updates on the attacks of the Israeli occupation forces on Palestinians in different cities and locations. We are compiling as many updates as possible in this thread on Twitter and sharing regular updates in our Instagram stories.

A list of resources* where you can track updates and developments is available at the end of this report. We will be updating it regularly to add new resources we come across.

Important note 2: Three solidarity marches from the Palestinian camps in Beirut will take place on Thursday May 20 at 5pm. More details will be shared on our social media soon.

Overview of the Situation and Protests in Palestine [here]

An article by Palestinian academic Mariam Barghouthi explained the situation and the ongoing attacks of the Israeli occupation forces against Palestinians following the occupation attempts to expel Palestinian families from the Sheikh Jarrah neighborhood in Jerusalem.

Article on Similarities of Palestinians’ Struggle in Lebanon and Palestine [here]

An article on Megaphone News by ARM’s Rahaf Dandash linked the struggle in occupied Palestine to the plight of Palestinian refugees in Lebanon. Similarities in racist policies and practices against Palestinians include the restriction on their movement outside camps by the Lebanese government and security forces, and the ban on going to the South, and the deprivation of social, economic and political rights.

An article by Ms. Magazine reported the increase in abuse of migrant workers in Lebanon in the context of the ongoing pandemic, emphasizing the exclusion of migrant and refugee communities in the government’s response since the beginning of the COVID-19 outbreak in the country.

An article by The Star reported the case of a Kenyan woman, Zena, who came to Lebanon after the outbreak of the pandemic. Zena’s mistreatment included physical assault and being denied food by her employer. After calling to report the abuse, Zena was taken by the police to the recruitment agency where she was also physically abused by the agent.

The article highlighted the shortcoming in the Kenyan government’s measures to protect domestic workers coming to Middle Eastern countries and the exploitation of their conditions by recruitment agencies.

Kenyan worker Malcolm Bidali was recently arrested by the Qatari security services for writing about the conditions and abuse of migrant workers in the country’s preparation to host the World Cup next year. His location remains unknown.

A Qatari official confirmed to the Guardian that a Kenyan national was indeed arrested and is still  “under investigation for violating Qatar’s security regulations.”

Report on Reintegration Program by UN Women and IOM [here]

A video by the United Nations (UN) on the reintegration program of the UN Women’s and the International Organization for Migration (IOM) featured a Nepalese woman who went back home from Lebanon. The program entails vocational training and psychosocial support for migrant women who are being evacuated to their home country due to the pandemic and the economic situation as a result of it.

*Resources for instant updates and news on Palestine