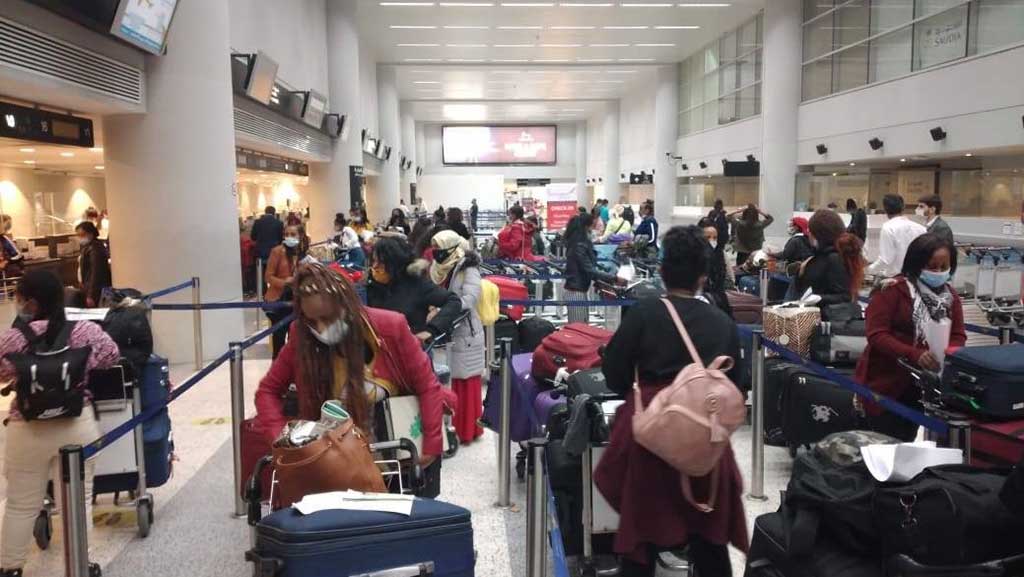 Ethiopian workers evacuated on November 13. Photo from the Ethiopian consulate in Lebanon

The Ethiopian consulate announced on Facebook that 84 Ethiopian women were evacuated on November 13.

The Ethiopian consulate met with a Lebanese lawyer to discuss the legal obstacles preventing Ethiopian workers from traveling home, especially the women who are being detained with charges and complaints.

An article by the Daily Mirror reported on the situation of Sri Lankan workers stranded in several countries in the Middle East including Lebanon. The article detailed the common obstacles preventing them from traveling, such as wage theft and job loss due the coronavirus situation. Excerpts were included from the letter that ARM and 60 other organizations had sent two weeks ago to the Sri Lankan government for urgent funding to evacuate Sri Lankan women from Lebanon.

A TV report covered the evacuation trip of the 22 Cameroonian women and the reintegration plan for them by Survivors’ Network, an organization partnering and coordinating with ARM and another organization in Cameroon.

7 more women will be traveling tomorrow.

The International Organization for Migration (IOM) released a situation report on its response to COVID-19 in the MENA region between October 29 and November 11. IOM has worked on repatriating migrant workers from Lebanon to their countries including Bangladesh, Sudan, Nigeria and Ethiopia.

The following are important relevant points from the report:

The World Food Programme (WFP) and the International Organization for Migration (IOM) released a report on the impact of COVID-19 and its implications on migrant workers worldwide with regard to food security and status of remittance-dependent households.

The following are important relevant points from the report:

“Fe-Male” organization released a mapping of services available for migrant domestic workers in Lebanon such as casework, legal services, sheltering, and health services among others. The mapping was done under “My Fair Home” campaign in collaboration with the International Labor Organization (ILO).

The information is available to download in several languages including Sinhala, Nepali, Bengali and Amharic.

Egna Legna Besidet released a video of an Ethiopian domestic worker abandoned by her employer. The woman initially wanted to travel home but the employer refused, then the latter called the police and sent her in a taxi to the consulate without her $300 due salary.

The head of Syndicate of Money Changers in Lebanon told Al-Markazia News website that dollar amounts that exchangers receive are not enough for migrant domestic workers, adding that they are exhausting the majority of limited dollars available in the market.