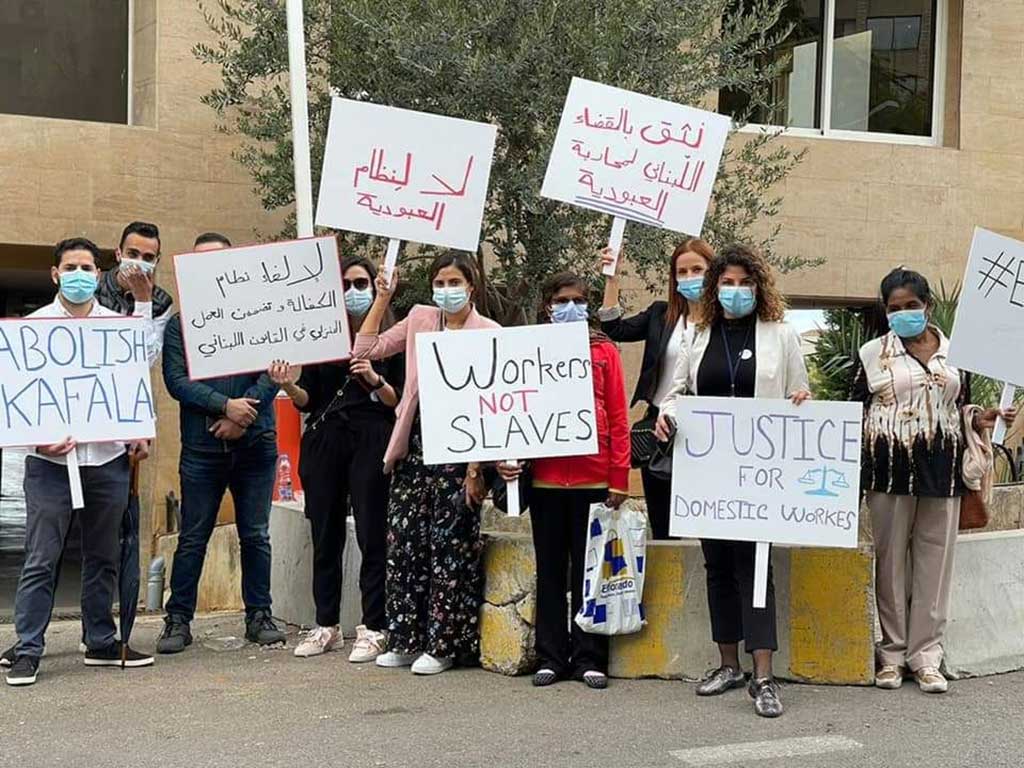 Demonstrators gathering in solidarity in front of the Baabda justice palace. Photo from Annahar

UNRWA filed a lawsuit against unknown individuals, on charges of damaging their properties and vehicles during a protest on the 18th of September. ِAn organizer from the Palestinian movement confirmed that Halba police station called about 22 people for investigation, most of which are women.

The lawsuit was later retracted following activists’ demands to UNRWA.

The demonstrators were protesting the evictions of over 50 families from their houses without providing them with alternative housing. The UNRWA had opened the compound in 2007 as temporary housing following the war in Nahr el Bared, while awaiting the reconstruction of their houses. The reconstruction was never completed.

A document issued last July by the General Security, which informs the Public Prosecution of Cassation that “Syrians were erecting agricultural rooms in the Bisri Dam area resurfaced this week. The Lebanese Eco Movement denied the claims, confirming that the land owners have returned to their land, and employed Syrian families to support them with agricultural work.

This is yet another attempt to use Syrian refugees as a fear mongering political pressure card in controversial issues.

The National Federation of Employees’ and Workers’ Union in Lebanon (FENASOL) participated in the 12th Confederal Congress of the Workers’ Commissions (CCOO) of Spain. The head of FENASOL, Castro Abdalla, presented a report detailing the economic crisis in Lebanon, and the ensuing poverty and unemployment.
The report also raised the issue of migrant workers in Lebanon who have become without work or any health care, and their inability to return to their countries after being abandoned by Lebanese sponsors and employers.

FENASOL also held a meeting in which they raised concerns about the situation of migrant workers under the Kafala system in Lebanon, calling out the slavery like conditions faced by migrant workers. FENASOL confirmed they will follow up on the living and social conditions of the workers in collaboration with the ILO and other humanitarian organizations.

An Ethiopian woman was found dead on Zahrani Highway. Security sources denied the preliminary news that the body was abused and dumped, and confirmed that it was a fatal auto-pedestrian crash. The body was allegedly hit by several cars due to the darkness. More investigations are being conducted.

Young Sierra Leonean Rugiato died after months of battling to get treatment in Lebanon and to go back home. She would have turned 26 in December.

Fundraisers were launched last year to support part of the expenses of her treatment.

The new minister of labor Mustafa Bayram confirmed in a statement to “Sawt Kel Lebnen” that there will be strict measures in recruiting new foreign workers, favoring the Lebanese workers and “protecting them”. The statement aligns with the discourse of the previous ministers Lamia Yammine and Camille Abou Sleiman regarding foreign labor.

The Clemenceau Medical Center (CMC), including its emergency department, is requiring foreign patients to pay in U.S. dollars cash for medical services. The decision includes Syrian and Palestinian residents, along with  residents with a Lebanese mother and a foreign father.

On Tuesday the 19th of October, the judiciary in Lebanon dealt for the first time with a criminal case related to slavery and slave trade, filed by a migrant domestic worker against her sponsor.

According to Legal Action Worldwide, the organization supporting her with legal representation, Meserat Hailu was locked in her employer’s house for 8 years, forced to work over 15 hours a day, cut off from her family, faced physical and verbal abuse, and was deprived of her salary for several months. The sponsor had also confiscated her passport.

The defendants did not attend the court hearing, and the hearings were rescheduled till the 10th of February. The court might issue an arrest warrant in case they fail to appear in court again.

The case is seen as strategic litigation as for the first time, the case is not limited to the unpaid wages but involves other legal aspects regarding slavery, slave trade, forced labor, abuse and racism.

Demonstrators also gathered in front of the Baabda justice palace to protest her case.