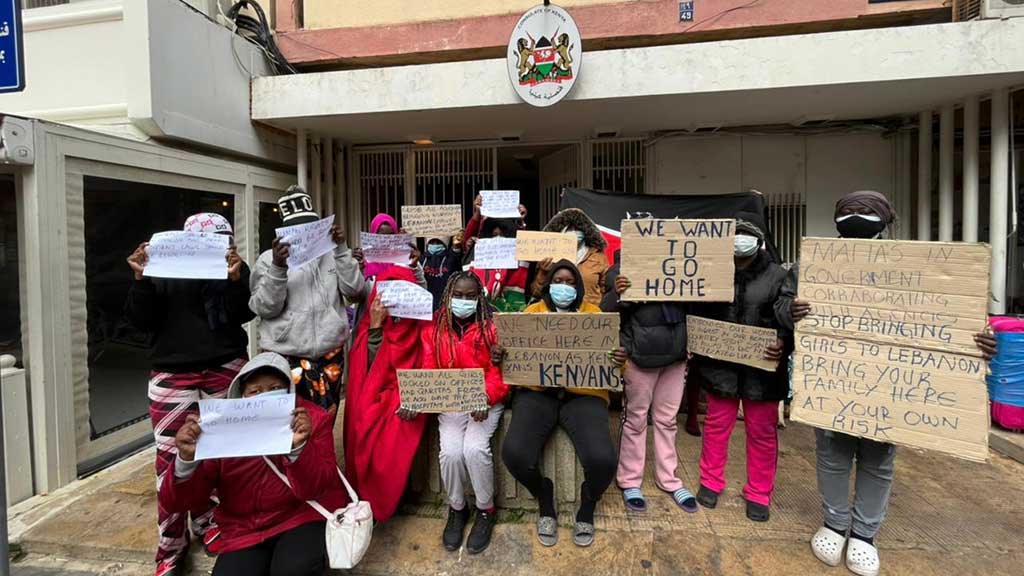 A number of Kenyan women have been protesting outside the consulate in Badaro, Beirut on January 6 to demand repatriation following the unresponsiveness of the consular staff to process their requests. The protest started with 10 women who had left the Caritas shelter, where they were taken by consular staff, and where they were promised they would only stay for 2 weeks but ended up staying for months without action by the consulate. The consulate had charged several women for their travel requests but did not provide any update with regards to their files for months.

The women reported being abused and mistreated by the staff of Caritas’ shelter, which was not the first time that migrant women have reported similar accusations about the shelter.

The protestors are also demanding accountability of the consular staff given the years of corruption at their expense, in addition to the exploitation and extortion they subjected the women to.

For more context, CNN had published a report of testimonies detailing the different instances of abuse and corruption by the Honorary Consul and Vice Consul, both of whom are Lebanese.

The Minister of Labor Moustafa Bayram requested the support of the General Security concerning the Kenyan protestors sleeping outside their consulate, without specifying the kind of support.

It is worth noting that no support for sheltering was provided by any Lebanese authority, and that the Kenyan women are deliberately staying outside the consulate until their demands are met.

Employer Abuses Ethiopian Worker, Drags her in the Street [here], [here] and [here]

A Lebanese man was filmed dragging an Ethiopian domestic worker named Aster that he employs in Jouret El Ballout, in the Metn area on January 5. The man was identified as Bechara Ghostine and was arrested by Broummana police station for less than 24 hours. He was later released after being made to pay 200USD, and the only official measure taken against him was being blacklisted by the Ministry of Labor.

The video spread online and was met with a disappointing statement (which he later took down) by the Mokhtar Issam Boujaoude denouncing the act as non-representative of the town but ignoring the attack all together. The Mokhtar claimed that Aster tried to run away from the employer’s house in a way that insinuates this justifies the attack. In an interview with New TV, Boujaoude claimed that Aster had tried to commit suicide and ran away after the employers stopped her.

The Minister of Labor Mostafa Bayram announced that an investigation would be opened and that the employer would be blacklisted and banned from sponsoring other migrant workers in the future.

Of course, this measure does not guarantee the man will not abuse other migrant workers in the future and is in fact a shortcoming given that many people employ migrant domestic workers but have a family member act as a proxy legal sponsor.

According to media reports, the agent in the recruitment agency that coordinated the Aster’s travel to Lebanon, called Mermaidia, made her sign a paper waving her rights and demands and pledging not to contact anyone for the matter. A recording of a phone call with the agent was published online in which he is heard saying that Aster will be traveling to Ethiopia, and then he condescendingly demanded that the interviewer stop covering the issue.

Reports also revealed that said agency has previously abused migrant women and forced many to undergo abortion. The Syndicate of Owners of Recruitment Agencies in Lebanon (SORAL) denounced the attack and demanded punishment, without addressing the complicity of the agency Mermaidia.

Report on Fragile State of Houses in Palestinian Camps [here]

A report by Campji highlighted the fragile state of houses and the resulting safety risks in Palestinian refugee camps where several houses have already collapsed. The damage to the houses is caused by the poor infrastructure which is further affected by rain, causing humidity and health hazards.

Residents reported concerns of roofs collapsing over them while they are sleeping, in addition to the risk of roofs falling on passersby in the street. They also emphasized the high costs of fixing walls and maintaining the structures of their houses, and demanded support from the United Nations Relief and Works Agency for Palestine Refugees (UNRWA).

Report on Emigration of Palestinians from Lebanon [here]

An article by Ashraq Al-Awsat reported on the increasing rates of emigration of Palestinian refugees from Lebanon with the onset of the ongoing economic crisis. The following points and figures were highlighted:

The General Security Office (GSO) published a breakdown of arrests, entry/exit, and work visas between mid-November and mid-December in the new issue of the GS magazine released on January 4. Highlights included the following: