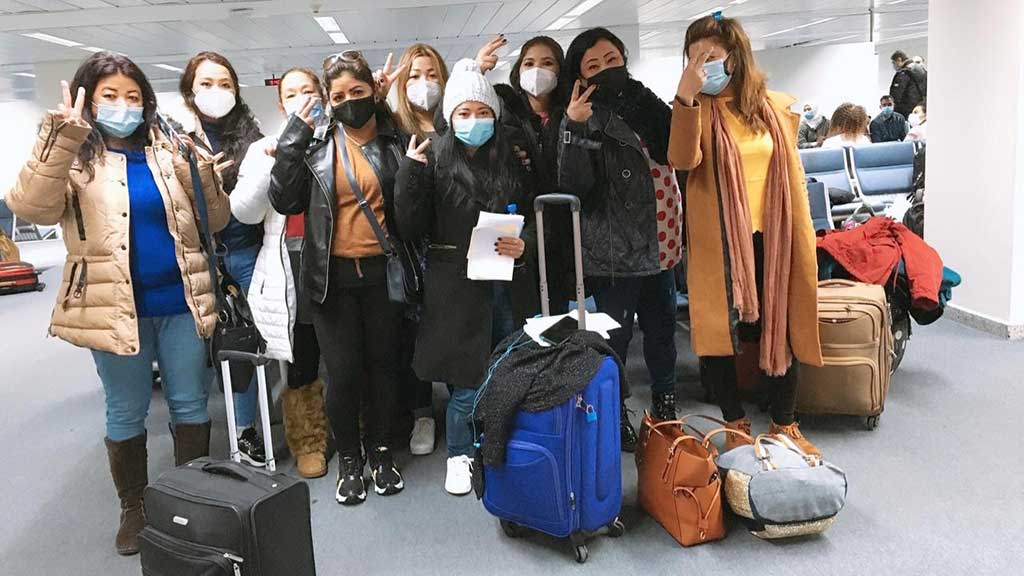 26 migrant women and men were evacuated to Ethiopia, Nepal, Mali, Nigeria, Cameroon and Benin between January 20 and 22 with the support of ARM.

Eleven Ethiopian women and one child were evacuated on January 22 with the support of Egna Legna Besidet.

The Bangladeshi embassy announced on January 20 that it would pause the evacuation process of people who registered last month due to the lockdown situation in Lebanon, to be resumed in February.

Second Round of Evacuation of Nepali Workers Complete [here] and [here]

A second evacuation trip of 10 undoumented Nepali women was organized by the consulate in Lebanon and supported by ARM on January 20. The consulate asked Nepali workers who wish to travel home to reach out, and stated that 10 more will be evacuated soon.

Hashtag #اللقاح_للبناني_أولاً (vaccinate Lebanese first) spread online after a number of political figures [here and here] called to exclude non-Lebanese from the vaccination process for COVID-19, calling to prioritize Lebanese citizens before foreigners.

The head of the Parliamentary Health Committee Dr. Assem Araji stated in a tweet on January 23 that the vaccine will not be limited to Lebanese citizens only.

Head of IOM Calls to Include Migrants in Vaccination [here]

The head of the International Organization for Migration (IOM) called on all governments to include migrants and displaced populations in their CVOID-19 vaccination plans regardless of their legal status.

The United Nations Department of Economic and Social Affairs published a report on migration in 2020 highlighting 10 key messages including the following:

The Cameroonian Community in Lebanon posted a call on Facebook to report any information on a Cameroonian woman who has been missing since 2013, less than a year after she arrived in the country.

Report by LBCI on Coronavirus Resources for Migrant Workers [here]

A report by LBCI featured an Ethiopian worker who contracted COVID-19, and listed several options and resources available for migrant workers in Lebanon to access healthcare under the pandemic and lockdown.

Campaign on Kafala by This Is Lebanon and the Lawyard [here]

An awareness campaign on the Kafala system was launched by Thus Is Lebanon and the Lawyard on Instagram, with more to follow.

Lucy, former domestic worker from Sierra Leone in Lebanon, launched an awareness campaign on the working and living conditions under the Kafala system in Middle Eastern countries. Her first video emphasized the value of domestic work and importance of protecting migrant domestic workers, especially that most of the attention has been shifted to the pandemic in the past year.

HRW Report on Conditions of Refugee Camps in Arsal [here]

A report was published by Human Rights Watch (HRW) on the conditions in the Syrian refugee camps in Arsal during this winter. Over 15,000 Syrians are currently living in harsh conditions without the infrastructure or protection required to get through the weather, two years after they were forced to dismantle their shelters by the Higher Defense Council.

The Working Group on the Universal Periodic Review of the United Nations’ Human Rights Council published the report of the 37th periodic review of the status of human rights in Lebanon. Among the abuses cited were the abuses and violations against refugees and migrant workers.

One relevant recommendation under Economic, social and cultural rights  included the “social protection for all workers, including migrants.”

*For more on the Periodic Review

By Legal Agenda [here] and [here]

By the United Kingdom Government