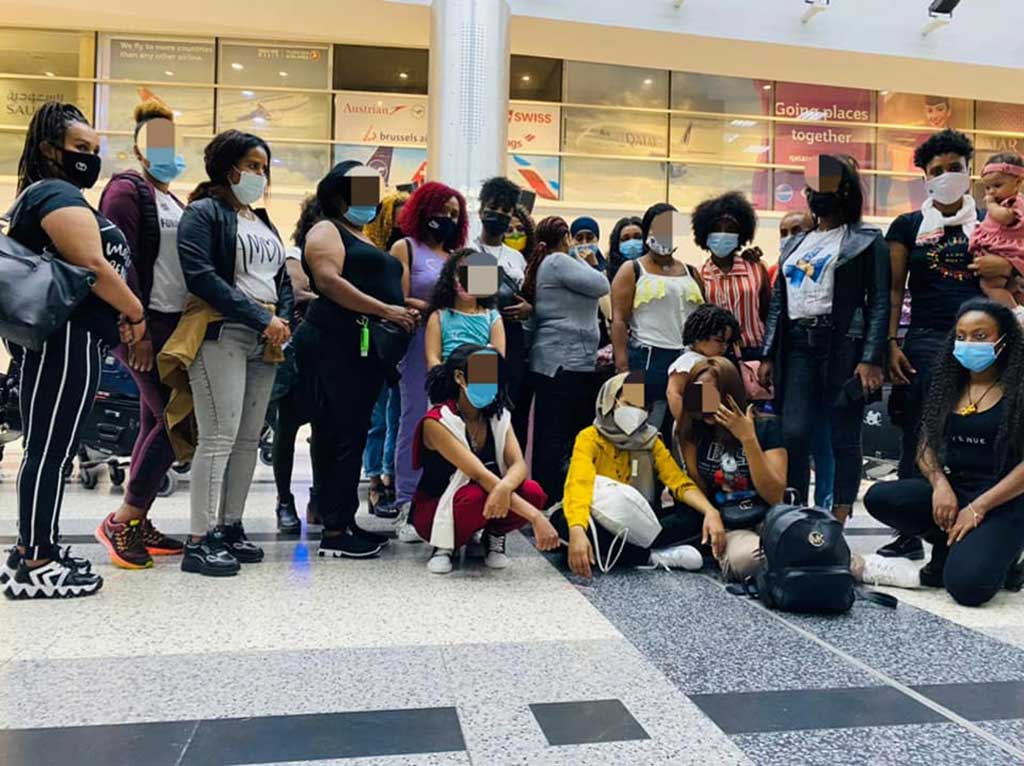 Bangladeshi workers evacuated on April 4. Photo from The Daily Star

Twenty six migrant workers were evacuated to Bangladesh, Ghana and Togo in the past week with the support of ARM.

Around 272 undocumented Bangladeshi migrants were evacuated on April 4 and are currently quarantining in a government-sponsored facility. Quarantine cost is covered by the government.

Over 4,600 of the registered workers have been repatriated in special flights starting from February 15. in addition to another 10,000 Bangladeshis who wish to return home.

Lebanon remains one of the many countries from which trips are banned in Bangladesh, which makes these evacuation trips an exception by the government due to the deteriorating conditions in Lebanon.

Egna Legna Supports over 40 Evacuations in a Month, including Court Cases [here]

Egna Legna Besidet announced that they have supported 47 Ethiopian women with evacuation between February 21 and March 29, of which 17 were facing legal charges that had delayed their travel.

Report on Impact of Evacuation on Lebanon’s Job Market [here]

An article by United Press International reported the changes in Lebanon’s job market after the evacuation of migrant workers over the past year. The changes include closure of recruitment agencies, increased demand for Lebanese workers in industrial sectors to replace migrants who left, and Lebanese women “filling the gaps” as freelance domestic workers.

ILO gave the following numbers to the reporter: 152,289 regular migrant workers are still working in Lebanon. Women from Ethiopia, the Philippines, Sri Lanka, Bangladesh, Ghana and Kenya, topped the list with 119,081. ILO’s figures do not include the number of irregular/undocumented workers, estimated by “unconfirmed report” to be around 80,000.

The International Organization for Migration (IOM) published a report addressing the status of migrants around the world in the context of the pandemic. It reported that in September 2020 alone, there were around 3 million migrants stranded around the world that were detailed.

In Lebanon, 70% of migrant workers surveyed by the Displacement Tracking Matrix had plans to go back to their countries. Among those cases was a domestic worker who attempted jumping from a balcony due to abuse by her employers, and another woman that was subjected to human trafficking.

At the first vaccination drive of the Sputnik vaccine imported for the private sector, caretaker minister of public health Dr. Hamad Hassan announced that the ministry had reserved 7 million doses to cover 60% of Lebanon’s population and 20% of residents who fall under the targeted age groups.

Dr. Hassan emphasized the inclusion of everyone present in Lebanon in the vaccination drives and campaigns regardless of nationality.

HRW Statement on Exclusion of Migrants and Refugees from Vaccination [here]

Human Rights Watch (HRW) issued a statement on the ongoing exclusion of migrant workers and refugees from the vaccination plans despite previous contradictory announcements and statements by government officials.

The statement emphasized the following points:

At least 4 posts were put up on Facebook trading groups offering to sell and buy migrant domestic workers they employ for 2000 USD in cash.

Legal Agenda published a report in collaboration with the International Labor Organization (ILO) on the verdicts of the legal cases concerning migrant domestic workers, in an effort to give recommendations for structural and judicial reforms that would improve migrant workers’ conditions.

The report is available in English and Arabic.

Report on Abandoned Ethiopian Workers Back in Ethiopia [here]

An article by Le Monde reported the reintegration efforts of community organizations for Ethiopian domestic workers who went back home from Lebanon after being abandoned by employers last year. This includes vocational training, temporary housing upon return, as well as psychological support and comprehensive treatment plans for post-traumatic stress disorder (PTSD).

In addition, the article reported the growing challenge of the women’s family rejecting them when they return without their due salaries, and the work of the organizations to raise awareness on the different factors leading to unpaid wages in Lebanon.

Judge Orders Investigation into Accusations of Torture Against Syrians [here]

State Prosecutor Judge Ghassan Oueidat issued a statement requesting an investigation by the government’s commissioner to the military court into the accusations of torture of Syrian refugees which were made by Amnesty International’s report.

Updates on Refoulement of Syrian Refugees from Lebanon [here] and [here]

Caretaker prime minister Hassan Diab attended the 5th Brussels conference on “Supporting the future of Syria and the Region” where he addressed the international community to request assistance in facilitating voluntary return as part of the Lebanese government’s plan.

Diab and caretaker minister of defense Zeina Akar described hosting Syrian refugees as a burden to the economy, adding that their stay os “temporary and should not be construed under any circumstances as a local integration.”