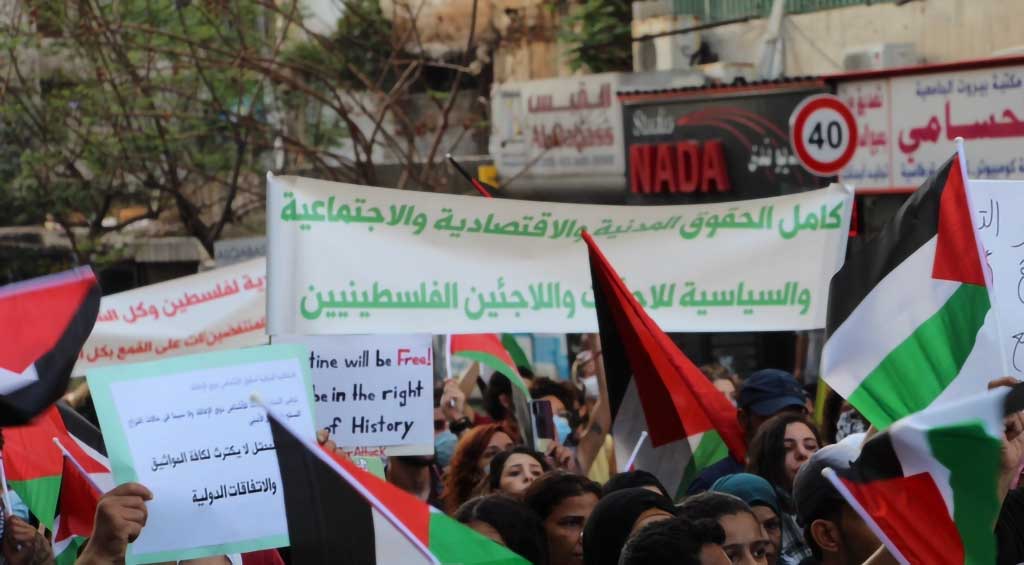 March in Beirut in solidarity with Palestine on May 20. Photo by ARM

Note: We are dedicating our social media platforms to share updates on the attacks of the Israeli occupation forces on Palestinians in different cities and locations mostly on Twitter and in Instagram stories. A list of resources* where you can track updates and developments is available at the end of this report. We will be updating it regularly to add new resources we come across.

An unidentified migrant woman was killed in an accident on Byblos highway on May 23. The body was left as hospitals refused to take it in without specifying the reasons. The body was later taken to Bouer hospital.

ARM tried contacting security forces and municipalities to inquire about the identity and nationality without receiving an answer.

A Bangladeshi domestic worker was injured by a stray bullet on May 16 in Saida after shots were fired in a protest against the Israeli occupation’s attacks on Gaza and Sheikh Jarrah in Jerusalem.

Syrian Voters Attacked on Way to Embassy [here] and [here]

Several Syrians were attacked on their way to the Syrian embassy to vote for the presidential elections on May 20. Several media outlets and accounts failed to report that people were threatened to vote, especially those residing in Northern camps in Tripoli and Miniyeh.

Access Center for Human Rights (ACHR) issued a statement explaining the context of the threats and urging Lebanese authorities to protect Syrian refugees.

New Report on Situation of Syrian Refugees in Lebanon [here]

The General Directorate of General Security issued an exceptional decision allowing Syrians over the age of 15 who became irregular after legally entering the country, to settle their residency status and to get identification documents.

Freedom United reported the ongoing activism and awareness efforts by former domestic workers in Lebanon on their situation, detailing the context of the Kafala system and recent efforts to dismantle it. The report highlighted the awareness work by the “Domestic Worker Advocacy Network (DoWAN),” a new organization in Sierra Leone raising awareness on the situation of migrant domestic workers under Kafala in the Middle East.

In addition, an open letter was addressed to the Lebanese ministry of labor by Freedom United, This Is Lebanon, and DWAN on unpaid wages and confiscation of the domestic workers’ documents by employers.

Eight migrants and one child were evacuated to Bangladesh, Cameroon, Kenya, Nigeria and Sierra Leone in the past week with the support of ARM; 4 of which had been detained with the child.