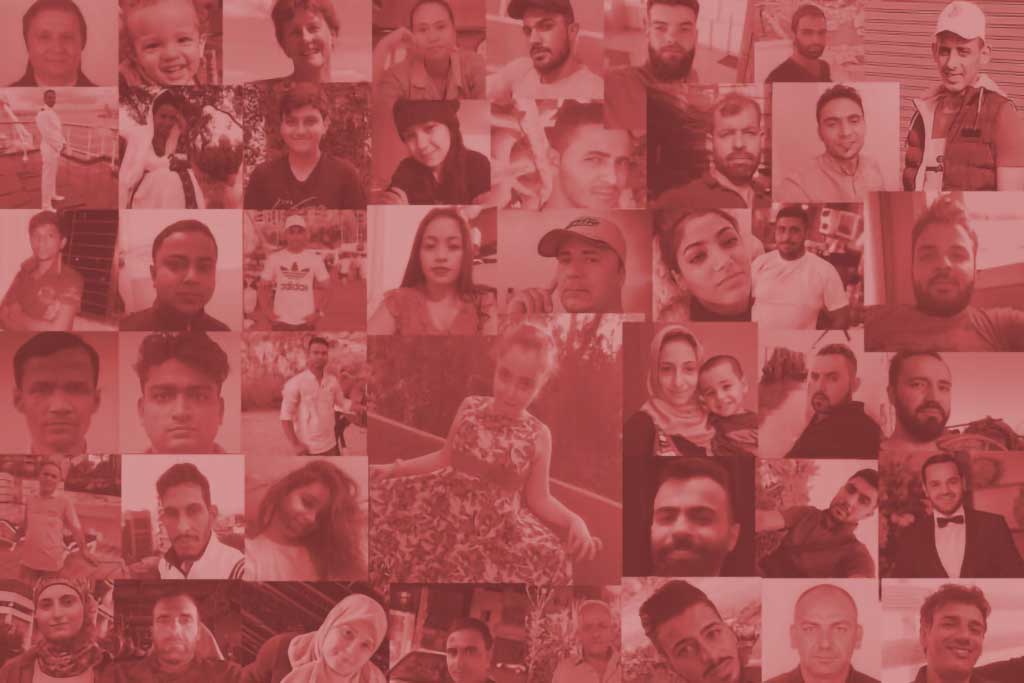 Photos of non-Lebanese victims of the Beirut explosion, from Legal Agenda

Note: The past few weeks, specifically last week, saw a surge in media coverage of the situation of Syrian refugees by media outlets in ways that scapegoat and demonize them, portraying them as part of the factors leading to Lebanon’s current crisis. These articles usually entail misinformation, inciting violence on the basis of false figures and numbers, and deliberate exclusion of relevant key facts and details.

The Anti-Racism Movement is planning to publish a regular Racism Monitor through which we aim to compile and analyze all racist incidents, policies, decisions, political developments and media discourse related to migrants and refugees in Lebanon.

The UN Resident and Humanitarian Coordinator Najat Roshid spoke at a conference on the Emergency Response Plan which entails humanitarian assistance to 1.1 million Lebanese and migrants in several sectors. The following points relevant to migrants and refugees were noted:

A survey by UNHCR assessing 5,035 Syrian households revealed that around 90% suffer from extreme poverty in the context of doubling debts per household and increasing children dropouts from schools due to rising associated costs (transportation; books, material..). The assessment was conducted as part of the annual VASyR cited above.

A decline in the number of Syrian refugees possessing legal residency permits compared to last year was also noted due to the high fees of renewing papers, fear of rejection, and/or of deportation in case the period of not having valid papers is deemed too long.

Nidaa Al Watan published an article comparing the living conditions of Lebanese people to those of Syrian refugees -who are called “migrants” in the article.

The article starts with clear misinformation about the “comfortable” situation it claims Syrians have due to aid, compared to the lengths Lebanese go to secure basic necessities and to avoid resorting to humanitarian aid, and goes on to blame humanitarian organizations for allegedly prioritizing Syrians over Lebanese.

The following is a list of misinformation cited in the article with our corrections:

Misinformation: The article claims that Syrian refugees benefit from a “monthly salary” in USD through Banque-Libano Francaise (BLF), and from support and aid for schooling and health care.

A new comprehensive list of 72 non-Lebanese victims of the Beirut explosion was published by Legal Agenda and Rights Frontiers in an article on the lack of compensation by the Lebanese state, and the discrepancies between official and non-official lists.

The list included the following nationalities: One Palestinian; one Pakistani, one Iranian, one German; one Dutch; one Australian; one French; 2 Ethiopians; 3 Egyptians; 4 Filipinas; 6 Bangladeshis; and 50 Syrians.

L’Orient Today released a new tool to calculate the number of hours a person needs to work in order to afford basic needs and items in Lebanon, including bread and sanitary pads. This tool is based on the National minimum wage, in Lebanese pound, which remains 675,000 LBP to this day and does not apply to migrant workers given the exclusion of their jobs from the labor law.

This tool would likely come in handy in the context of formal employment and could be useful to account for employment in informal jobs and sectors where workers suffer lack of protection. In the case of migrant workers and migrant domestic workers, the additional burden of having to send remittances back home would be reflected in too many hours, with the rise of prices and basic necessities to get by.

Three Syrian men, Ahmad al-Waked, Tarek al-Aalu, and Fares al-Zoubi, face the risk of deportation by the General Security (GS) after they were stopped at Beirut airport on 3 different dates in mid-September while on their way to board a plane to Belarus. All 3 men entered Lebanon illegally 2 months ago while fleeing Daraa in Syria, and at least 2 are still detained without any criminal charges according to a statement by Amnesty International, urging “that they be released or charged with a crime recognized under international law.”

Waked and Aalu are reportedly both being detained at the GS’s Information unit. While al-Zoubi is in an unknown location after being first transferred to the Lebanese Army Military Police.

Stories of Migrants from the Philippines in the Middle East [here]

Friedrich-Ebert-Stiftung published stories and testimonies of 3 migrant workers from the Philippines in Lebanon and Saudi Arabia during the first phases of the pandemic. Their period of employment in the 2 countries entailed sexual violence and labor exploitation by employers, as well as abuse by recruitment agencies.

The article argues for a transnational justice mechanism to retrieve unpaid wages and retroactively hold employers and abusive agencies accountable, as advocated since the start of the pandemic by the Migrant Forum Asia in the “Justice for Wage Theft” campaign.

The organizers of Dubai Expo stated that 5 migrants who worked in the reconstruction for the event died due to severe working conditions. The spokesperson admitted that authorities were well aware of the dire conditions the migrants were forced to work under, and that the organizers resolved the issue.

This follows the European Union’s call on countries to opt out of participating in the Expo due the conditions inflicted on migrant workers which included forcibly signing contracts in language they cannot read, confiscating their passports, overworking them for long hours, among other violations.