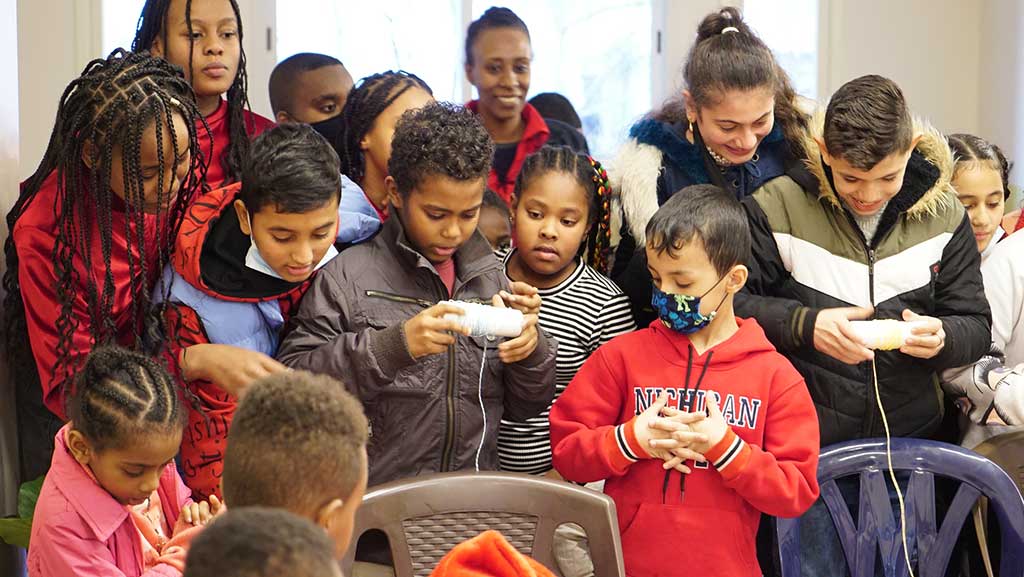 (Beirut, September 3, 2014) – Lebanon is deporting locally born children of migrant workers and in some cases their mothers, nine nongovernmental organizations working in Lebanon said today. A recent decision by General Security, Lebanon’s security agency in charge of foreigners’ entry and residency, to deny residency permit renewals for a number of low-wage migrants who have had children in Lebanon and for their children disproportionately interferes with the right to family life.

Since May 2014, nearly a dozen female migrant workers, many of them longstanding residents of Lebanon, reported to human rights groups that when they went to General Security to renew residency papers for themselves and their children, they were turned down. Some were told they were not allowed to have children in Lebanon and given a short period of time to leave the country. In some cases, they said, they were given as little as 48 hours.

“Under General Security’s new directive some families are being torn apart while others are apparently being denied their livelihoods simply because they’ve had children in Lebanon,” said a spokesperson for the organizations. “The Lebanese authorities have not given any justification for this new policy and should immediately revoke this directive as it interferes with the right to family life.”

Under Lebanese residency regulations, certain categories of low-wage migrants, particularly domestic workers, are not allowed to sponsor residency for their spouses or children. However, in the past, Lebanon-born children of the migrants could apply for year-long residency up until age four and then could apply for residency if they enrolled in school.

Sources within General Security have confirmed to nongovernmental groups that the agency has a new directive regarding the renewal of residency permits for Lebanon-born children of low-wage migrants and their migrant parents. Despite written requests from the nongovernmental groups to receive a copy of the directive the agency has yet to respond. Activists say the directive was apparently adopted in January 2014, but has been applied more stringently since May and has resulted in the expulsion of some family members of migrant workers.

In one case, a Ghanaian woman told the organizations she was separated from her 10-year-old son when General Security refused to renew his residency permit even though he was enrolled in school. She said she sent her child back to Ghana alone so that she would not lose her residency and job in Lebanon.

In another case, a 13-year-old Sri Lankan boy who was born in Lebanon and had lived there all his life and his mother were issued deportation notices by General Security in June even though the boy was enrolled in school. His father, also from Sri Lanka, was not expelled from Lebanon.

The boy, who is now in Sri Lanka, told the organizations:

Someone at the Lebanese General Security said that they were not issuing visas to children anymore. We only had two days to leave. I had had a residency permit in Lebanon since I was born. I never lived in Sri Lanka before. My mom and I are now in Sri Lanka. My mom has no work here and is trying to go back to Lebanon. My dad is still in Lebanon. If she leaves, I will have to stay here and live with my cousins.

A woman from Madagascar told the organizations that, “When my friend went to General Security to renew her children’s residency, she was told that residencies are for people who come here to work, not to have children.”

Most of the migrants who reported the problem have lived in Lebanon for more than a decade. All had given birth in Lebanon since moving there to work. None said that they previously had any problem getting residency permits for themselves or their children.

The migrants affected told the organizations that their children have few or no ties to their home country and many do not speak their parents’ native tongue, making the potential for successful integration in schools back home very difficult. Many of these migrants come from Bangladesh, Sri Lanka, the Philippines, Ghana, South Sudan, and Madagascar. It is unclear how many families have been affected, but certain migrant community leaders reported that the decision has affected many of their members.

Migrants who remain in the country unlawfully risk arrest and prolonged detention before deportation and are unable to safely access public services. Migrant children are required to have a residency permit to enroll in public schools, human rights activists said.

Based on research by the organizations, all migrant workers interviewed who were affected by the decision so far appear to be women who are Category 3 and 4 workers under Lebanon’s labor regulations – low-paid workers in industries such as sanitation, agriculture, and domestic work. Although foreign workers in these categories are not allowed to sponsor the residency for their spouses or children, until recently, women in these categories could extend their residency permits to include children born in Lebanon.

Human rights lawyers told the organizations that these women would be able to get a series of year-long residency permits without charge for children born in Lebanon up to age four. Once the child enrolled in school at age four, the mother could apply to extend residency to the child provided that she remained lawfully in Lebanon and produced necessary documents verifying school enrollment.

However, General Security’s website now states that the residency of children studying in Lebanon whose parents are classified as Category 3 or 4 workers are subject to a case-by-case decision by General Security. The website does not indicate upon what grounds the decision will be made. This decision, which appears to expel migrant workers with children on the grounds that they have started a family in Lebanon, contravenes Lebanon’s international human rights obligations under the human rights treaties to which it is party, including the International Covenant on Civil and Political Rights (ICCPR), the Convention on the Elimination of All Forms of Racial Discrimination (CERD), and the Convention on the Rights of the Child (CRC).

Lebanon’s obligations under CERD, including to non-citizens in its territory, requires it to avoid “disproportionate interference with the right to family life.” Similarly, Lebanon is obligated to uphold its obligations under article 23 of the ICCPR which reaffirms the right of men and women of marriageable age to marry and to found a family. The new directive and its implementation result in disproportionate interference in family life, in particular the separation of families through expulsion.

Children have a right to, as far as possible, to be cared for by their parents, and the right to family relations without unlawful and disproportionate interference. The CRC requires countries to “ensure that a child shall not be separated from his or her parents against their will, except when … such separation is necessary for the best interests of the child.”

In any proceeding that could lead to the separation of children from their parents, all interested parties must be given an opportunity to participate and make their views known, and any separation must be subject to judicial review. The CRC also calls on countries to deal with questions of parents or children entering a country for the purposes of family unity “in a positive, humane, and expeditious manner.”  Lebanon is required under the CRC to secure the rights to all children within its jurisdiction without “discrimination of any kind.”

The Lebanese government should comply with its international obligations by ensuring that General Security considers the family interests involved before rejecting the renewal of residency for workers or their children or considering their expulsion. The government should also ratify the International Convention on the Protection of the Rights of All Migrant Workers and Members of Their Families to safeguard the rights of migrants in Lebanon.