To the Minister of Labor: We Urge you to End this Mistake 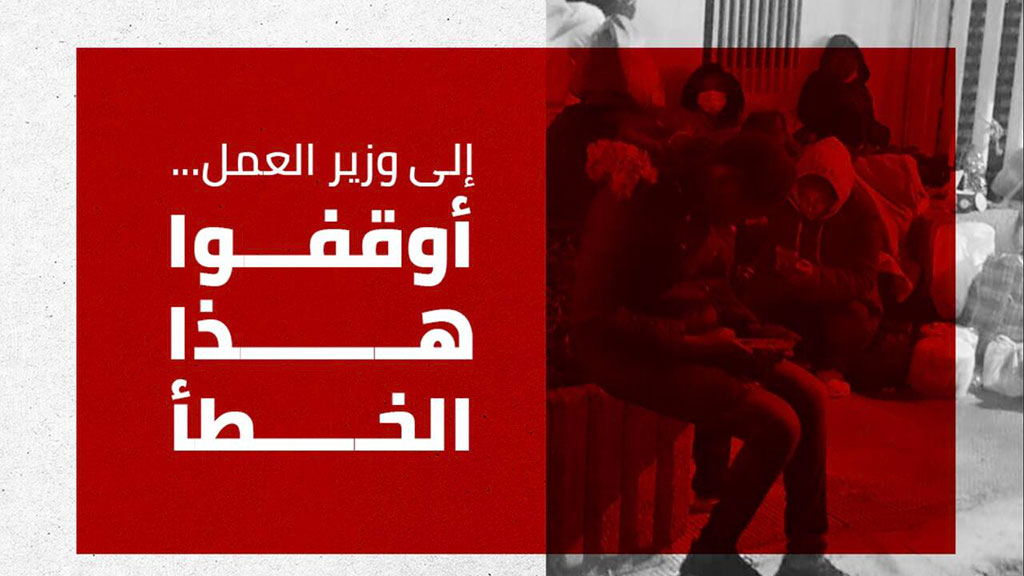 The Ministry of Labor has worked covertly, in coordination with owners of recruitment agencies, on a draft Standard Unified Contract and has excluded from the discussions the domestic workers and the NGOs who have a long experience in this context. These organizations and workers had previously contributed to the drafting of the Standard Unified Contract that was issued by Minister Ms. Lamia Yammine on September 8, 2020.

After reviewing the latest draft, (see the article published in the Legal Agenda at this link), we consider the contract to be an absolute scandal that audaciously violates basic human rights in favor of the vested interests of a handful of “traders” embodied by the recruitment agencies in Lebanon. The current minister of labor, Mr. Mustapha Bayram, aims through the new draft Standard Unified Contract to throw away all previous efforts and reforms that have only been possible due to the continued negotiations and lobbying of the relevant stakeholders and the struggle of domestic workers. If adopted, Mr. Bayram’s draft contract would pave the way to the utter obliteration of gained reforms.

Despite its flaws and lack of implementation methods, the previous 2020 version of the Unified Standard Contract constituted a first step, towards weakening the enslaving “Kafala” system applied on migrant domestic workers. However, the appeal filed by the recruitment agencies before the Shura Council resulted in a complete rejection of this contract, only to be replaced now by a new version designed to cater to the interests of those agencies, indicating the extent of influence these cartels have, which have imposed their conditions with total disregard to the common good and human dignity. Instead of advancing the previous version and eliminating its flaws, the newly amended contract throws us back by decades – thus contributing to what has always been a disgrace to Lebanon’s human rights record. It goes without doubt that ministries do not ensure any continuity in their work from one term to another which brings us back to the starting point.

First, the new amended contract eradicates the right to terminate the contract fairly for both parties. The contract poses a financial burden on the domestic worker in case she ends the contract, regardless of the working conditions, while giving the employer the unilateral right to end the employment contract without having to pay any financial compensation to the worker. Under the previous contract, when the second party (the worker) terminates the contract, the first party (the employer) has the right to recoup some of the recruitment expenses from the recruitment agency or the new employer (in case the worker wishes to work for another employer), based on a certain equation specified in that contract. The new draft removes this financial arrangement and holds the worker responsible for the financial compensation in case she terminates the employment, allowing blackmail to happen.

Additionally, the new contract narrows down the margin of conditions by which the second party is able to terminate the contract without prior notice during the trial period. It also allows the employer to terminate without providing a flight ticket based on vague conditions, such as giving two warnings without necessarily having a proof of the malpractice, which adds to the ambiguity of the new contract.

Third, the new contract violates the right to freedom of movement of domestic workers by ‘legalizing’ acts and situations criminalized by the law. The new draft contract makes the employer in control of the worker’s movement during the first three months of signing the contract. It additionally breaches the personal freedoms of migrant domestic workers by allowing the employers to confiscate the worker’s passport and residency permit, throughout the employment period.

Fourth, the new contract adopts a clause that grants conditional privacy to the domestic workers by allowing them to share the bedroom with a woman (as if the worker would want that!), thus showing manipulation in choosing terms that might appear as giving additional rights. This conditional privacy clause is clearly a reflection of ill-conceived ideas about this category of workers.

Fifth, the new contract robs the worker of basic benefits that were included in the older version of 2020 by:

Sixth, the new contract allows the transfer of the employment contract to the employer’s heirs in the event of the employer’s death. This reveals an outright entitled view of ownership towards domestic workers as they are considered an inherited property as any other private property!

National Federation of Employees’ and Workers’ Union in Lebanon (FENASOL)

The Centre for Social Sciences Research and Action

Lebanese Observatory for The Rights of Workers and Employees