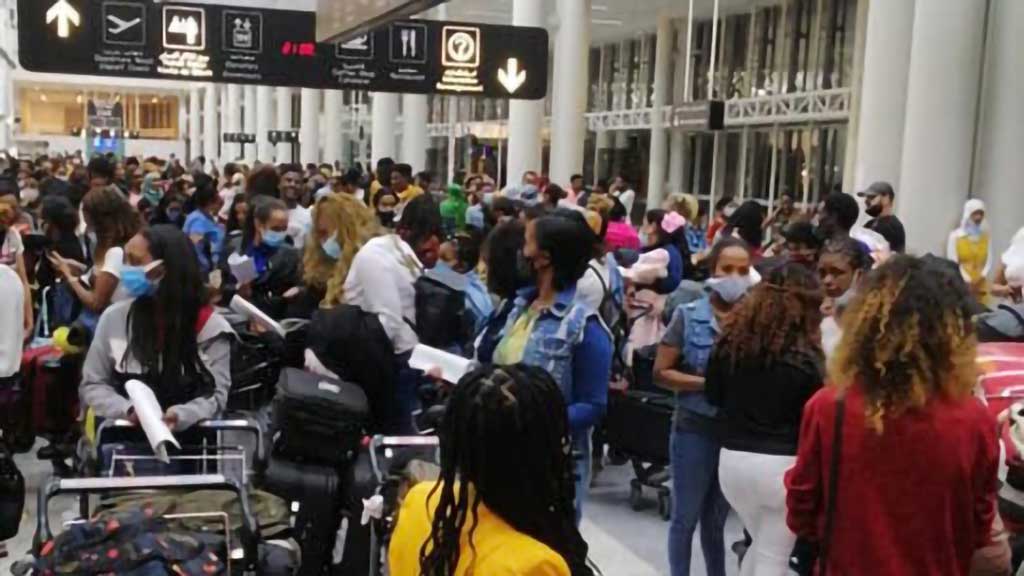 Report by MTV on Crisis Impact on Domestic Workers [here]

The head of the Syndicate of Recruitment Agencies in Lebanon (SORAL) stated that more than 3,000 people work in recruitment agencies, many of which closed or stopped working. He also added that payment of salaries should be done in USD as stated in the contract.

Report by LBCI on Evacuation of Migrant Workers [here]

A report by LBCI released numbers related to the evacuation of migrant workers from Lebanon due to the dollar shortage and deterioration of their living conditions. The following numbers were cited:

An article by Al Akhbar reported on the replacement of evacuated migrant workers by Lebanese workers in 2 cleaning companies. After said companies announced vacant positions, many Lebanese people applied to work but few ended up staying due to the tiring nature of the job according to the manager of Ramco. Other reasons included the long working hours, low salaries, and social stigma around the job.

Vice Arabia released a new short documentary on Mekdes, an Ethiopian domestic worker and MCC member, narrating her experience with her former employer since coming to Lebanon.

Video on Abuse of Two Domestic Workers by Employer [here]

Kafa Organization released a video of the testimonies of 2 domestic workers who were abused by the same employer while working together for 9 months. The abuse included verbal and physical aggression, refusing to pay salaries, confiscating their belongings and medicine, and feeding them expired food.

Two Ethiopian women and an Ivorian woman talked to ARM for Labor Day about their experiences after arriving in Lebanon compared to the expectations and promises they were given about the work they’d do. They also talk about potential alternatives if Kafala were abolished in terms of regulating domestic work and negotiating conditions with employers.

Report by Megaphone on Exploitation of Migrant Workers in Numbers [here]

Megaphone released a video explaining the profits made from exploiting male migrant workers in various sectors in Lebanon, emphasizing the trafficking aspect of the recruitment process by Lebanese mediators who coordinate their entry to the country and often deceive the migrants as to the nature of the job and the salary. Workers often end up arriving in Lebanon to find that there is no job and the sponsor was in fact a shadow sponsor.

The profits were reported as follows:

Friedrich Naumann Foundation (FNF) released a new report on the Kafala system in Lebanon emphasizing the unequal power dynamics between migrant domestic workers and employers, specifically in the context of the current economic crisis.

Report by Lebanon24 on Abuse of Domestic Workers [here]

An article by Lebanon24 reported the case of a domestic worker named Safia, who was evacuated from Lebanon after agreeing with the employer to send her the remainder of her unpaid salary.

The director of the ministry of labor (MoL) stated that it was difficult to pursue cases of unpaid wages legally because non-payment was due to the economic situation, and not to the intention by the employers to exploit migrant domestic workers.

An article by Legal Agenda reported from security sources that the murder of the agladeshi dismembered woman is allegedly an “honor crime” by the husband, adding that he will be transferred to the Public Prosecutor in Baabda to face trial.

The article stated that this contradicts the presumption of innocence, as it is unknown whether or not a lawyer and a translator were present in the interrogation.