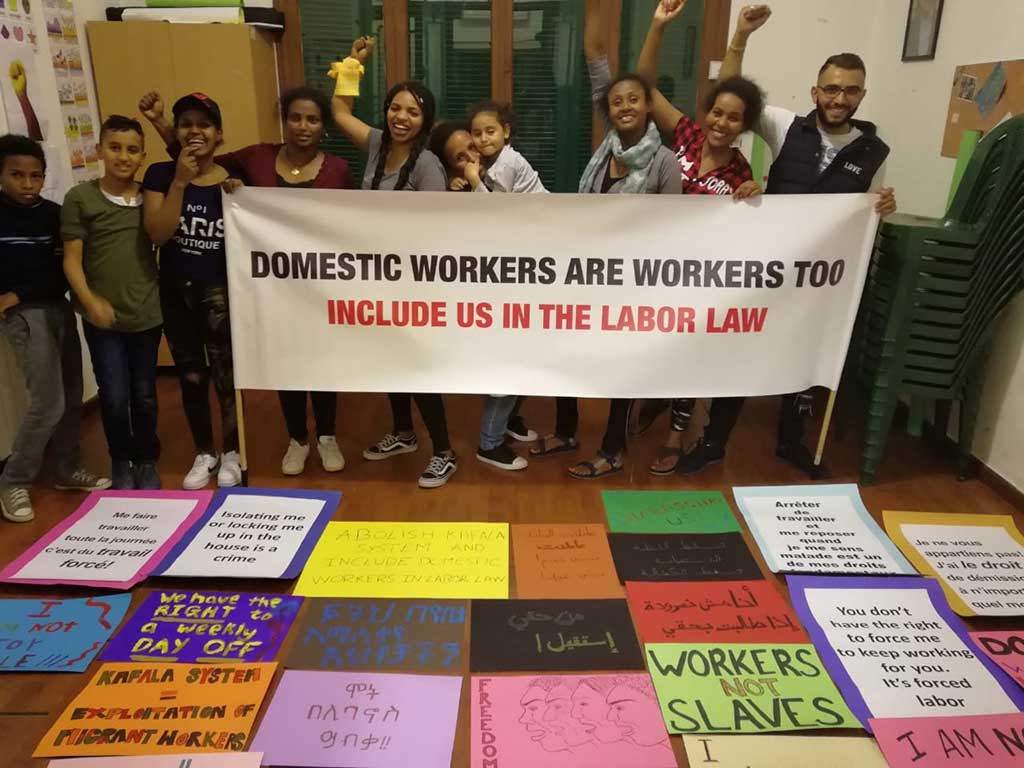 On December 29, 2014, six Lebanese workers submitted a request to the Labor Ministry to form such a union. With support of the International Labour Organization (ILO), the International Trade Union Federation (ITUC), and the Federation of Trade Unions of Workers and Employees (FENASOL) in Lebanon, approximately 350 domestic workers of various nationalities gathered for the union’s inaugural congress on January 25, 2015. But union members said they have received no response to their request, and Labor Minister Sejaan Azzi denounced the union as illegal, media reports said.

“Instead of slamming the union proposal, Minister Azzi should push forward on longstanding promises to protect the rights of domestic workers and bring abusers of migrant domestic workers to justice,” a spokesperson for the organizations said. “These workers, some of Lebanon’s most vulnerable, urgently need a protective structure so that they can advocate for change and have productive dialogue with the government and employers.”

The union proposal would include domestic workers and others who provide care in homes for the elderly and those with disabilities, those who provide cleaning services in homes and offices, and some other similar categories.

Article 7 of the Lebanese labor code, enacted in 1946, specifically excludes domestic workers, both Lebanese and migrants, denying them protections afforded other workers. Families in Lebanon employ an estimated 250,000 migrant domestic workers, primarily from Sri Lanka, Ethiopia, the Philippines, and Nepal. While article 92 of the labor code allows some foreign workers to join unions and associations, the code has been interpreted to bar union membership for domestic workers and others excluded from the labor law. Under article 92, all foreign workers are also explicitly denied the right to elect or be elected as representatives of a union.

As a result, thousands of workers have been denied the right to freedom of association and collective bargaining, and there are inadequate legal safeguards for migrant workers and some Lebanese laborers, leaving them vulnerable to abuse and exploitation. Lebanon should treat all workers in accordance with international human rights law, which requires all countries to respect the rights of everyone in their territory to freedom of association, without discrimination, the organizations said.

In addition to a lack of labor protection, domestic workers are subject to restrictive immigration rules based on Lebanon’s sponsorship-based kafala system that puts them at risk of exploitation and makes it difficult for them to leave abusive employers. The high incidence of abuse and inadequate government response has led several countries, including Ethiopia, to bar their citizens from working in Lebanon.

The most common complaints documented by the embassies of labor-sending countries and nongovernmental groups include mistreatment by recruiters, non-payment or delayed payment of wages, forced confinement to the workplace, a refusal to provide any time off, forced labor, and verbal and physical abuse. A 2010 Human Rights Watch report highlighted Lebanon’s poor record of punishing abuse against domestic workers.

A migrant domestic worker from Cameroon named Rose who attended the inaugural congress told the organizations that her employer confiscated her passport when she arrived in Lebanon and that she was forced to work seven days a week. She signs an employment contract at a notary’s office each year but it is written in Arabic so she has no idea what it says.

“When I asked my employer for details, they just told me that it was for my residency application at General Security and nothing else,” she said. ”Workers, both Lebanese and migrants, need real labor contracts that respect and guarantee our rights. We call on everyone in civil society to speak out against these violations and help us push for change.”

Kawthar, a Lebanese woman living in Beirut, has done domestic work for seven years since her husband died. “My previous employer used to make me work very long hours and one time refused to pay me at the end of the month, saying he was poor and didn’t have any money,” she said. “But I knew he was lying and just trying to exploit me.”

Kawthar has learned to stand up for herself and now has better employers. “Now if someone causes me problems, I have the tools to defend myself,” she said. “I want to use the union to educate other workers on their rights so that they can defend themselves too.”

Mustapha Said, senior workers’ specialist at the ILO in Beirut, told the organizations during an interview that Lebanese domestic workers also endure difficult working conditions and acknowledged that more attention should be given to this issue.

A Lebanese decision to deny domestic workers the right to form a union would violate the country’s obligations under the International Covenant on Civil and Political Rights (ICCPR), to which it is party. Lebanon’s obligations under the ICCPR, including to non-citizens in its territory, stipulates that “everyone shall have the right to freedom of association with others, including the right to form and join trade unions for the protection of his interests.” It further requires that “no restrictions may be placed on the exercise of this right other than those which are … necessary in a democratic society in the interest of national security or public safety.” The ICCPR requires Lebanon to ensure that everyone in its territory can exercise freedom of association, “without distinction of any kind.”

Under the 1998 United Nations Declaration on Human Rights Defenders, everyone has the right “[t]o form, join and participate in non-governmental organizations, associations or groups” for the “purpose of promoting and protecting human rights and fundamental freedoms.”

In June 2011, Lebanon voted in favor of the ILO’s adoption of Convention No. 189 on Decent Work for Domestic Workers, the treaty that protects domestic workers, but has yet to take steps to ratify the treaty or bring itself in compliance. The ILO convention establishes the first global standards for the estimated 50 million to 100 million domestic workers worldwide. Under article 3, domestic workers are guaranteed the right to freedom of association.

Other key elements of the convention require governments to provide domestic workers with labor protections equivalent to those of other workers, including minimum wage salaries, social security, and the right to retain their passports and identity documents; to monitor recruitment agencies rigorously; and to protect workers against violence. Unlike with other international conventions, the ILO’s bylaws prohibit the ratification of conventions with reservations.

Lebanon should ratify ILO convention no. 189 and implement its provisions. Lebanon should also ratify ILO Convention No. 87 on Freedom of Association and Protection of the Right to Organize, which states that “workers and employers, without distinction whatsoever, shall have the right to establish and, subject only to the rules of the organization concerned, to join organizations of their own choosing without previous authorisation.” This convention is one of the eight core ILO conventions. Although Lebanon has not ratified the convention, it is committed under the 1998 Declaration on Fundamental Principles and Rights at Work to respect and promote key principles and rights, including freedom of association and to collective bargaining, before having ratified the relevant conventions.

The Labor Ministry reportedly has said it is developing a draft new labor law, based on ILO convention no. 189, but the details have yet to be made public. Despite repeated public announcements by Lebanese officials that they would improve conditions for migrant domestic workers, reforms have been insignificant.

The Lebanese government should amend the labor code or adopt a new law to protect the rights of domestic workers and to abolish the kafala system, the organizations said. A new law to protect domestic workers should, at a minimum, ensure equality with all workers included in the labor law. Such measures should also ensure the right to freedom of association and the right to collective bargaining without discrimination to all workers.

“Migrant workers obtain a visa before they come to Lebanon and live and work here in a legal way, so why deny them of their fundamental right to organize?” said Castro Abdallah, president of the Federation of Trade Unions of Workers and Employees in Lebanon.

Unions and workers’ organizations have helped push a wave of improved labor laws and enforcement for domestic workers in many countries, including protections on minimum wage, hours of work, rest periods, social security, and recruitment.

The International Domestic Worker Federation consists of 55 domestic worker organizations and union affiliates, including from countries of origin for Lebanon, such as Nepal, Indonesia, and the Philippines. There are also numerous other trade unions or workers’ organizations that include domestic workers among their members. Lebanon would be out of step with growing global momentum on domestic workers organizing if it fails to recognize the new union, the organizations said.