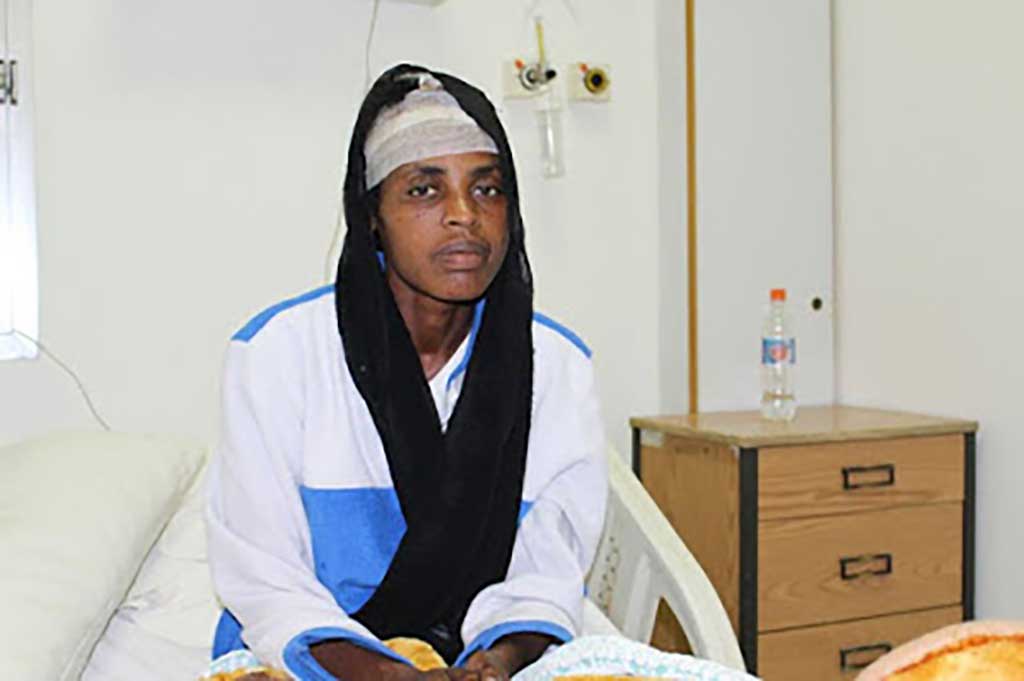 Today we went to Dar El-Ajaza Hospital. We met with 3 women, 2 from Ethiopia and a third who is perhaps from Ghana. They were all on the first floor, the mental and psychiatric ward in the hospital. None of them were ‘crazy’. You want to get rid of someone, someone of ‘less value’, like migrant women for instance? Put them at a place like this and claim they are ‘crazy’. It’s a very easy thing to do in Lebanon. You could also get away with committing a crime by claiming that you did it because the victim was crazy and you had to ‘restrain’ them, and then lock them away where their story can never be heard or told.
The following are some stories, as recounted by the women at the hospital, and friends who visited them personally:

– She was taken back to the agency yesterday by the people she used to work for, and then a big quarrel happened, typical of agency quarrels here, during which one of the men who work at the agency violently pushed her from the back, as she says, and she fell down on a corner on her head, causing her head it to open with a huge amount of blood gushing out. We have a photo (too harsh to share). The first thing that happens is that the agency owner takes her to Dar El-Ajaza, rather than to a hospital emergency room.

Meanwhile, the agency owner, a ‘Waheeb’ from Barbeer, makes a proper deal with a doctor there (whose name we have), who accepted to admit her with no base or proof of mental disability whatsoever, with one request. He wanted to stitch her head outside and then come back to admit her. The doctor of course can’t explain getting her inside Dar El-Ajaza with all the blood, so ‘Waheeb’ then takes her to Makassed Hospital and it takes them a few hours to make the stitching. Then, when they are done 4 hours later, he drops her in a taxi and transports her with all the apathy in the world back to Dar El-Ajaza.

Right before leaving the hospital, one passerby shouts out:

‘We know very well what you have done to this girl. You are not just going to wash it away by throwing her at psychiatric hospital now. Shame on people like you.’

Then, at the door, another security guard that witnesses this tells one of the Ethiopian woman who was escorting her through this process to secure her from more harm from this agency: ‘Don’t you know/have anyone who can help? Do not let them take her to this hospital. It will be the end of her.’

In the taxi (which is supposedly a random taxi): The man who pushed her was sitting in the front next to the driver, the injured woman is sitting in the back with 3 other Ethiopian women (who came to her rescue to the hospital and forced themselves inside the taxi with the agency owner when they knew he was taking her to another hospital, and little did they know by then which hospital it was yet.)

The taxi driver hears the quarrels happenings between agency guy in front and the Ethiopian women in the back, and he comes up with a splendid suggestion: ‘Khalas, just give her to me. I’ll make her work at my house, for me and my wife. Make me a ‘tanazol’ now and I’ll take her. Don’t worry about her, I’ll handle her.’ (We don’t know if he had had any previous agreement with the agency owner)

One of the Ethiopian women in utmost shock at the sequence of this day’s events: “Is this a film or what? Take her do what with her? Can’t you see she is all soaked up in blood? Who will take responsibility for this? If something happens to her at your house, if she dies tomorrow, what will you do then? Huh?”

Taxi driver: “Stop exaggerating. She is strong as a horse. She’ll be fine. Just give her to me…”

The agency guy: “If it were up to me, I want to get rid of her ASAP. if you (the Ethiopian women at the backseat) accept, Id’ sign this ‘tanazol’ this second. Whoever wants to take her, I’ll give her to you. I don’t want this headache of another crazy woman. Take her, fix her, make her work for whoever, I don’t give a damn. Just rid me of this responsibility.”

Meanwhile, the guy who had initially pushed her at the agency was following their footsteps. He was waiting at the door of the hospital, watching whoever goes in and out to her room, then followed them to Dar EL-Ajaza and stood by the door and did the same.

Also important to note, that the agency owner had a different story to share at first, when different people were coming in to the room were she was in at the hospital and seeing her in that state of blood and terror. He said what we would all guess is easy to say. ‘She jumped of the balcony. No one had touched her.’ Soon on, he changed his version.

She seems very mentally and physically healthy. She is just very surprised she is at this hospital. She says she didn’t have ‘bad employers’. She was a little ill (physically) and they took her to the hospital and then she realized it was this hospital. And then she never saw the employers again. It’s been more than 10 days. She wants to work again and doesn’t have any news on when she is allowed to leave this place.

She was reading through her bible. She spotted 2 other migrant women in the corridor when they finished their visit to the ‘Martha’ woman. She told us: “I am not crazy. I have been here for long and don’t know why. What for?’ Then, this conversation was interrupted by hospital staff asking us to leave on the spot.

The last thing that that echoes in our head after this long day of Lebanese institutional surrealism with migrant workers is the last sentence ‘Martha’ told us before we were leaving (by instruction from the doctor, who was very worried that she had visitors, to the nurses on the phone), as she held the arms of one of us in the saddest posture ever:

‘Please, help me. I do not want them to force me to take some weird meds, I don’t know what’s in them, and then they can kill me while I’m here and say I’m crazy and I did it to myself. That’s what they will do, right?’

We are thus publicly sharing this information with the ministry of Labor, which has been making statements about canceling licenses for employment agencies and fining them over different violations. We would have liked to call the ministry of Labor on the hotline designated for MDW-issues and discuss this with them directly, but unfortunately for us, their hotline never picked up since they launched it in mid-2015. Not once. We actually did call another accessible number at the ministry to complain that the hotline they claimed to have launched never works, and the employee who responded interrupted our complaint to ask us the following: “I need a girl who can work for my mothers’ house in the village for 150$/month. Could you guys find me someone quick?”

What is this joke place we live in?

Is there an end in sight to any of this?